When companies choose to apply Lean Six Sigma principles to their activities, their goals are usually to do more, do it better, with less waste, and more predictability. For decades Six Sigma has stood out in the fields of manufacturing and management as an ideal approach for seeking excellence. This is because it is based in great measure on analysis of tasks, and in identifying similarities and differences between repeated activities with the intent of steering toward consistent and sustainable improvement.

On occasion, opportunities arise that allow for meta-analysis of these practices, and which teach a great deal both in the similarities presented as well as variations on a standardized process across a selection of similar workplaces.

One such opportunity was afforded through the data of a recent U.S. Census survey. As described in the article, The Importance of Structured Management Practices, published in MIT Sloan Management Review (2017), the data tracked 10,000 companies and revealed “striking variations of management practices even within the same corporation.”[1] This type of side-by-side comparison allows for an objective analysis of management styles that most consistently contribute to performance and success. In this case, the paper’s authors, Bloom et al. concluded for the existence of a particular set of practices that they called “structured management.”

Of particular noteworthiness in the description of structured management is the deduction that human-oriented practices such as consistent hiring, performance review, and incentive practices rank as highly as more academic and structured concepts like research and development, and in their words, more than twice as important as IT implementation. The authors found that factories or businesses using more structured management practices showed greater productivity, profitability, innovation and growth.[2]

The Census survey delivered some interesting statistics that revealed a widespread inconsistency of structured management practices across plants. It showed that almost 20 percent of these plants used a large number of structured management practices, while well over one-quarter did not. Most interestingly, this variation was occurring across plants owned by the same company. The larger the company was, the more management differences it had.

This type of analysis draws attention to the power of side-by-side observation that helps identify best practices and wasteful ones in situations where many of the other situational influences are the same, but for one. Most interesting might be data derived from states that share geographic borders, in which external forces like climate and topography, as well as socio-economic factors such as average workforce age or median income are consistent – states like New Hampshire and Vermont, for example.

It is frankly troubling that the authors for this study choose to single out IT implementation as significantly less important. There is a growing trend in management personnel – as practiced out on the front lines (far from academia) – who are recognizing that IT deployment is a vital life force to any organization and that not only should senior IT managers such as a Chief Information Officer (CIO) or a Chief Information Security Officer (CISO) be given increased influence at the boardroom table, but that C-suite members in general need to become significantly more aware of the importance of IT in the handling and defence of data in an increasingly connected world.

The MIT Sloan report concludes rather meekly by stating that companies should pay attention to the impact and adoption of structured management practices but should not sacrifice their individual cultures in so doing. It may be preferable, however, to elicit from this report the significance of large-scale data gathering such as the census and the need for more of the same, more quickly in the future. 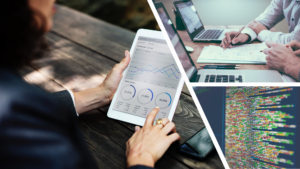